Just days after the 1967 Detroit riot, my father packed up the family in his Oldsmobile and took us on a terrifying road trip to Twelfth Street, the epicenter of the civil disturbance 50 years ago this month. Faded color photos from that trip are tucked away in a family album that ended up in the bottom of a box in my basement and rarely examined in the ensuing years.

As a 43-year-old Detroit police lieutenant, my dad had been in charge of logistics at the Herman Kiefer Hospital command center, just blocks from where the riot had started, assigning patrol units made up of National Guard soldiers and tanks, along with Michigan State Police and Detroit Police officers and cruisers. It was no desk job. He worked outside during the riot, ducking bullets fired at the police from neighboring houses, watching businesses burn to the ground and mourning the death of one of his close friends, Jerry Olshove, the only Detroit cop killed during the riot.

Because he worked 12-hour shifts during the riot, we didn’t see much of him at home on Archdale in northwest Detroit that week. He went to work wearing a riot helmet, camouflage fatigues and no badge. He later told me that the bright gold badge with the inscription “Tuebor,” Latin for “I will defend,” was too much of a target for snipers — and it was pinned in a bad place, right over his heart. He and other officers had been told not to wear them by their superiors. My dad would come home from his shift covered in mud from crawling on his belly next to the tanks. 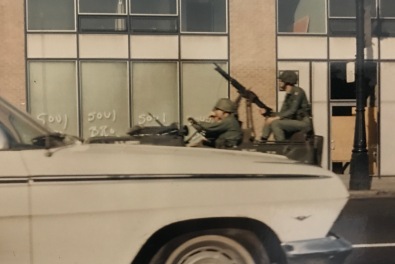 After the burning and looting stopped, my dad, a Detroit native and son of a Ford Rouge Plant foundry worker, wanted his family to get a firsthand look at what had happened. It was an unusual move for him, since our family never went away on vacation and rarely ventured together beyond our block in northwest Detroit, except maybe to go to games at Tiger Stadium or the Olympia or to visit my grandparents on St. Lawrence Street. Nor did my father discuss feelings. Instead, you had to hunt for clues about what was going on behind the uniform, including such tiny details as the little black piece of elastic he wore around his badge for months after Jerry Olshove’s death in a quiet tribute to the guy he golfed with on his day off. 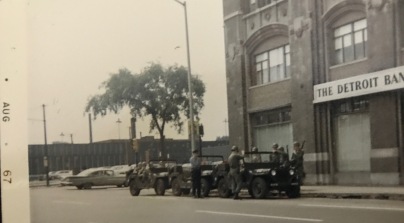 The ride to Twelfth Street reminded me of the trips we would make to St. Hedwig or Holy Cross cemetery when a Polish relative would die. There was always the obligatory route that would take the mourners from St. Cunegunda or St. Andrew Church and then past the house of the deceased before heading to the burial ground. Hats were tipped and heads bowed as the hearse slowly drove past a tiny bungalow or two-family flat that had been meticulously maintained during the person’s life. It was a fitting tribute because home meant everything. On that post-riot trip I felt as if I were in a funeral procession paying a final homage to my city. There was no jostling or pinching in the back seat, a time-honored tradition during most rides, only stunned silence and a few choked-back sobs.

Sitting between my siblings and surveying the devastation, I knew that my days of freedom in Detroit were over. That summer, I had taken the bus to downtown Detroit from Grand River and Southfield with my girlfriends to window-shop at the J.L. Hudson department store, eat hot-fudge sundaes at Sanders and gawk at the naughty posters in the windows of the downtown burlesque houses. We had no curfew and never felt in any kind of danger.

I had turned 14 the week before the riot started. Also in the car were my sister Claudia, who was 13, my brother Mike, 6, and my mother Irene. 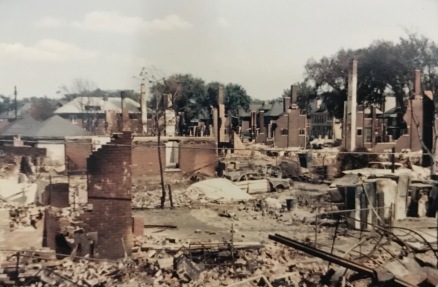 Fires were still smoldering and police were arresting the occasional looter as we drove past Twelfth Street and Clairmount, where the uprising started. It was jarring to see Army Jeeps with helmeted soldiers with a variety of weaponry alongside Detroit buses and taxis. Piles of rubble made the city look like something out of Europe in World War II. The businesses that survived had “Soul Brother” scrawled across the front. The smell of smoke hung in the air.

My mother sat in the front passenger seat and snapped photos with a Certo Dollina that was given to her by her cousin Joe Niezgoda, a former U.S. Army intelligence officer who had taken the Dresden-made camera off the body of a dead German soldier in Europe in 1945. Flipping through the album 50 years later triggers question after question. In an odd juxtaposition, the riot photos are pasted in the back of the album, following photos from happier times. There is a picture of Willie Horton, waving to the crowd as he heads into the dugout during a Tiger game and another of Tiger pitcher Pat Dobson. There are pictures of my dad and grandpa on a hunting trip, one of my dad next to a new car and a school photo of my brother from the first grade.

Why weren’t the riot photos kept in a special album? Is the album a valuable historical document or a weird little scrap of another time? What was my dad thinking in putting us in that car and driving us into hell?

When I asked him that question a few days ago, my dad, now 93 and retired from the police force for 41 years, simply said: “I thought seeing it would be good for you.”

The tour, conducted in silence with no explanation about the riot’s cause or ramifications, capped a bizarre week for the kids in the back seat. Instead of roaming the neighborhood on our bikes until the street lights went on as we typically did all summer, we had been restricted to the basement as tanks rumbled down our street and National Guard helicopters flew overhead. We were physically on the periphery of the riot zone but still felt as if we were under siege and in danger.

Some of my male cousins, who were slightly older and lived on Wormer, snuck out of their house and rode their bikes down Grand River. Police snipers on top of buildings ordered them to go back home. Our neighborhood seemed to unite somewhat during the riot, with a continual stream of people visiting our house and checking on my mother. But she noted that the goodwill stopped once she ran out of beer.

I have a vivid memory of the moment my dad was notified about the riot. We had just returned home from 10 a.m. Mass at St. Mary of Redford church on Sunday July 24 when the call from police headquarters came, ordering my dad in to work. I was wearing a bright green shift dress and pantyhose and was feeling particularly grown up that day. Looking back, I realize that instant was the end of childhood and my emotional break from the neighborhood. I would get an after-school job when school started in the fall in a nascent quest to become independent.

Shortly after the riot, the neighbors on Archdale held a meeting and all pledged to remain in Detroit and not flee to Southfield, Warren or Farmington Hills. The very next day, the first for-sale sign went up down the block and nobody ever spoke again about staying around. One by one, the houses sold, mainly to African Americans.

My parents stayed on Archdale until 1984, when there were crack houses on the block and a leader of Young Boys Inc., a Detroit gang, lived across the street. When my kids grew up, they would sometimes ask grandpa about what he did during the summer of 1967. He loved to tell entertaining cop stories, such as making protective tinfoil hats in the station for people who said they were being contacted by aliens, but he never had much to say about the horror of the riot.

As I revisit the album in 2017, I am reminded that the pilgrimage to Twelfth Street was one of two road trips my family took that week. The second was a first-time-ever family trip to Tawas City. We stayed in cabins owned by a Detroit neighbor, a city sanitation worker with a large family. My sister and I hung out in the main house, huddled in the attic with other teens, smoking and listening to Sgt. Pepper’s Lonely Hearts Club Band.

Nobody wanted to go to the beach or the local street dance. We were all Detroit teens and we were in shock. My parents came up so my dad could “rest” after his grueling week. But I remember my mother feeling anxious and eager to get back home. They only stayed for one night and went back to Detroit, where my dad cut the grass and washed the windows, prosaic activities that always made him feel better and in control of a bad situation.