My sister Claudia spent the last three years living in Saudi Arabia, a country where women are not permitted to drive and her family did not even own a car.

So when she and her husband moved back to the U.S. in June after his work assignment ended, shopping for a new vehicle was high on her family’s list of priorities. I couldn’t wait to see what the first vehicle in their driveway would be after years without a car payment. 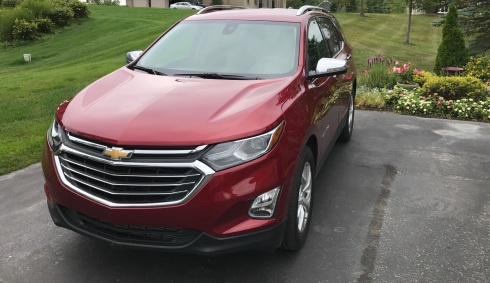 They considered the Ford Edge and several Subarus, but ended up buying the 2018 Chevrolet Equinox compact SUV, which was completely redesigned for the new model year.

When we met up at a mini family reunion in mid-July, I happened to be test-driving a 2018 Equinox Premier, a slightly fancier and more expensive version of the one she bought.

As we parked the SUVs side-by-side and compared notes, Claudia said she was experiencing a bit of “reverse culture shock” after moving back and part of that was a big dose of sticker shock at vehicle prices. The Equinox, even though it ended up as her family’s top choice, is no exception. 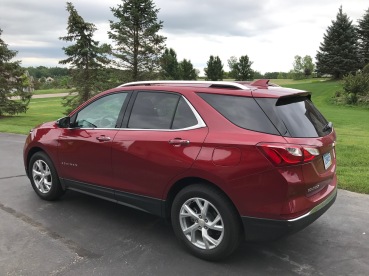 While the base Equinox starts at an affordable $24,525 and is in the same ballpark as such competitors as the 2017 Ford Escape and Honda CR-V, a high-end model can creep beyond $35,000. My test Equinox was priced at $33,975, including an $895 destination charge and a $1,895 options package that bundled a long list of items such as a heated steering wheel and lane-departure warning.

However, the improvements to the five-passenger Equinox, especially compared to the first-generation 2006 model Claudia and her family once owned, are impressive. The 2018 version is lighter, has an attractive exterior, good ride quality and lots of standard features, including a touchscreen infotainment system, pushbutton start, rearview camera and a Wi-Fi hotspot.

I plan to check in with Claudia down the road to get her long-term impression of the Equinox – and what it’s like to be behind the wheel again.