I’m often jumping in and out of test vehicles with my sister-in-law Jean Jennings, a longtime automotive writer and editor. So when she showed up at my house one afternoon last week, it was only natural for us to get behind the wheel of the redesigned 2017 Mazda CX-5 compact SUV and go somewhere. (Hint: it often involves a shopping trip.)

“Let’s go to Jenny’s Farm Stand and get some of those Red Haven peaches,” Jean suggested.

The route, along winding Huron River Drive, highlighted the CX-5’s sports car-like handling and supple ride, which makes it a standout among the 18 compact SUVs on the market. It’s an SUV crafted with drivers in mind, not just those who want a practical family hauler.

We admired the CX-5’s subtle yet gorgeous cabin, which is comparable to many luxury crossovers. The upscale interior on the test CX-5, a Grand Touring model, featured French-stitched padded armrests and brightwork touches. The understated, elegant cabin reminded me of some of my Eileen Fisher scarves, classic treasures that never look outdated despite changing fashion trends.

A thoughtful addition for 2017 is a power liftgate, which is standard on the Grand Touring model. It comes in handy when you’re hauling bushels of peaches or other cargo.

The CX-5 is equipped with a 2.5-liter four-cylinder Skyactiv-G engine that delivers 187 horsepower, nearly the same output as the top-of-the-line 2017 Honda CR-V. Fuel economy is acceptable at 23 mpg in city driving and 29 mpg on the highway. 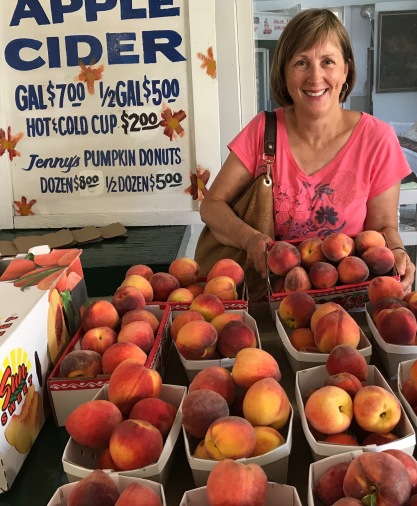 The base 2017 CX-5 is priced under $25,000, but that can rapidly inflate with high-end models such as the Grand Touring with all-wheel drive. Our test CX-5 was priced at $33,785, including a $940 destination charge. That included a $1,830 options package that bundled a long list of items, including a heated steering wheel and heated rear seats.
We got our peaches, which were a cut above those I usually buy at the grocery store. I later found out that Red Havens are prized. One expert said they are “generally not for the wholesale chain-store market.” So, it was worth going out of the way to get them. Kind of like the CX-5, which should have lots of appeal for compact SUV buyers who are seeking a sweet alternative and wouldn’t normally look beyond obvious choices such as the CR-V, Toyota RAV4 or Subaru Forester.