My siblings and I watched the Three Stooges and the Adventures of Superman on Saturdays under the doleful gaze of a 20-inch statue of the Infant of Prague in my grandmother’s living room at 5207 St. Lawrence Street in Detroit.

The Infant, a copy of a revered 16th century statue in the Czech capital, always was better dressed than we were, decked out in real diamond jewelry and brocade robes that were handmade by my grandmother and liturgically correct. That is, the Infant wore green for everyday apparel — so-called “ordinary time” in the Catholic Church — purple during Lent, gold at Easter and pink for Gaudete Sunday in Advent.

My grandmother practiced an unusual blend of Catholicism and superstition.

She put the statue on top of her TV set, a place of honor, but would stick lottery tickets and slips from the illegal numbers racket up the dress for good luck. I always thought of it as an odd sort of Detroit shrine, far better than anything at the Blessed Sacrament Cathedral downtown or St. Cunegunda Church down St. Lawrence street from grandma’s house.

When grandma died, my mother inherited the statue, along with his 75-year-old bottles of holy water and assorted rosaries. In a somewhat sacrilegious move, she threw out all the outfits and relegated him to a dresser in her bedroom. Today, he wears the simple ivory robe he was cast in and an antique diamond ring. I find it hard to look at him. He seems almost naked compared to the old days when he was as much a part of our lives as Larry, Moe and Curly. 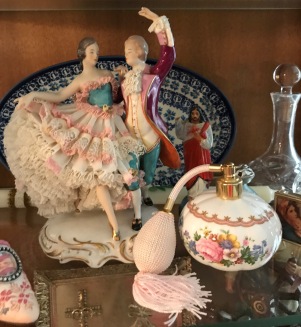 I’ve been thinking about him a lot lately, especially as my dad approaches his 94th birthday and my mother heads into her late 80s. I know that I will inherit the statue at some point, along with china cabinets full of stuff like ceramic Viennese dancers, a tacky version of the Venus de Milo and some baroque cupids treasured by my mother and reviled by the rest of us.

I’m not the only Baby Boomer in this pickle.

The September issue of Real Simple magazine features a story on how to deal with mothers-in-law who keep “giving us their stuff.” One bit of advice: “Can you try to just take whatever she wants to give you and maybe get rid of it after it’s had a brief stay in the basement?”

The Wall St. Journal did a similar story recently and pointed out how minimalist children of Baby Boomers don’t want their parents’ china parakeets, empty Cool Whip containers and other detritus.

Unfortunately, I can’t seem to say no to the old stuff.

“You don’t have a house, you have a museum,” says my son Dan.

He’s right, but there’s a reason why I can’t get rid of inherited items, including my grandfather’s tiny Polish prayer books from 1914 and the reign of Pope Benedict XV, an album of photos of dead relatives I don’t know from Eastern Europe (yes, in their caskets) and a lithograph of St. Therese of Lisieux that grandma kept next to her ironing board in the basement. (Not sure why she wasn’t on top of the TV with Baby Jesus.) 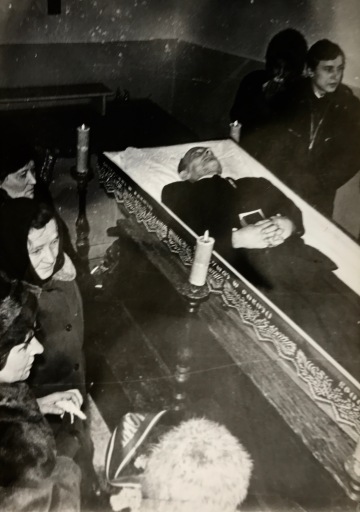 I keep the items because each one tells a story and provides a link to the past.

The framed photo of my paternal great-grandmother Agnieska that hangs in my dining room is a key part of my grandfather Mike’s journey from the old country and my family’s story.

His mother Agnieska ran a small candy store on Otis Street in Detroit with her sister Apollonia — Ciotka (pronounced “CHUT-ka”) Polka or “Aunt Polka” to customers — and made enough money to return to her village in Poland in the early part of the 20th century. She died when my grandfather was 11.

Villagers in the old country thought of her as a wealthy woman because she was buried in a pair of blue satin slippers at a time when most people went barefoot to their final rest. Everyone in the village came to pay their respects when she was laid out, mainly out of curiosity about the footwear, according to family legend.

Shortly after her death, her husband married a “neighbor lady.” Eventually, they had a son and named him Michael, the same name as my grandfather.

My devastated grandfather, who felt he had been replaced, rolled up the photo of his mother and got on a boat for Detroit and a job at the Graham-Paige auto plant in the late 1920s. He ran into naming problems again at the Detroit factory. He was warned that they only hired German workers at the plant. He called himself Mike Kremen, not Mike Krzemienski, and got the job.

The picture of his mother was one of the few possessions he brought with him to the New World. How could I ever let it go? 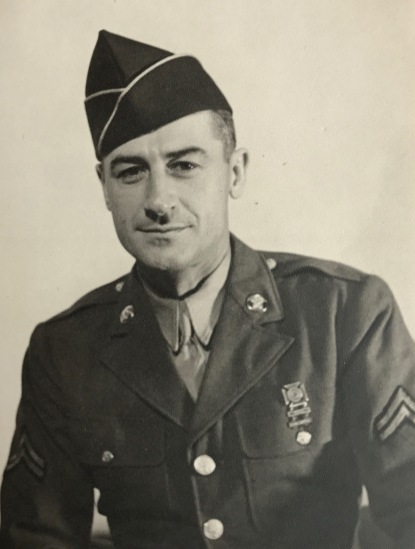 My grandfather was a man of contradictions, a gruff World War II Army veteran with an entrepreneurial spirit who ran a bar for factory workers in Detroit before and after the war. He would wake up every morning and have a shot of Crown Royal whiskey and a Newport cigarette before he spoke to anyone.

But he had a measure of class as well. He always wore a white shirt and a tie to work and did not tolerate swearing in the bar. Grandpa always checked my hands to see if I had a manicure (I never did) and he loved to buy clothing and jewelry for the women in the family, including some he designed himself.

He was deeply religious, too, and would tip his hat every time he passed a church. He returned to Poland in 1965 to build a chapel in his old village and put up a fancy tombstone for his mother. Back home, after he closed the bar at 2 a.m., he would end his day by kneeling in front of the TV before the Infant of Prague and praying. I believe that was the last thing he ever did, since he died in his sleep one Saturday night after work.

In addition to running the bar, my grandfather was a self-taught carpenter who built the house on St. Lawrence. Another one of my treasures is the model he made of the house before the construction started.

My grandmother’s name was Rozalia or Rosalie and everyone called her Rose. Small details in the house speak of my grandfather’s love for her, including a stone inset of a rose he put in the peak of the house and a massive rose garden in the back. Even the bar was called the Rose Café. Sometimes I drive by the house today just to look at the rose tribute.

I spent a lot of time in that house when I was growing up and when I get anxious, I look at the model, which is tucked in a bookshelf in my family room, next to treasured books from my childhood that I will never part with. I turn the model house around and peek into the tiny bedroom where I curled up on a cot during summer vacation, watching the rose garden illuminated by moonlight and smelling the sulfur odor from the auto factories in the neighborhood, a fragrance, like church incense, that I will always associate with safety.

And once again, I’m back with grandma and grandpa on St. Lawrence Street, with Baby Jesus keeping silent watch over everything from his place of honor in the living room.