When a neighbor in her Polish village raised his rifle and shot her little dog, that was just the beginning of the heartache for my grandmother.

The dog’s furry brown pelt was used as a collar on a new winter coat made by the neighbor’s wife. Grandma was reminded of the violent act every day that winter when she went outside and saw the neighbor in his new garment. Even though she was only nine, she vowed she would come someday to America, a place where people bought ready-made clothes and didn’t have to hurt a beloved pet to keep warm.

It didn’t exactly work out that way for her.

She arrived in Detroit just before the Great Depression. Since there was little money, she was forced to make her own clothes and those for her family. As a result, she became quite a renowned seamstress in her West Side neighborhood near Michigan and Lonyo — an activity she pursued when she was not tending bar for the men working in the auto plants.

A few months ago, my mother was cleaning out a closet and stumbled across Grandma’s old sewing basket. 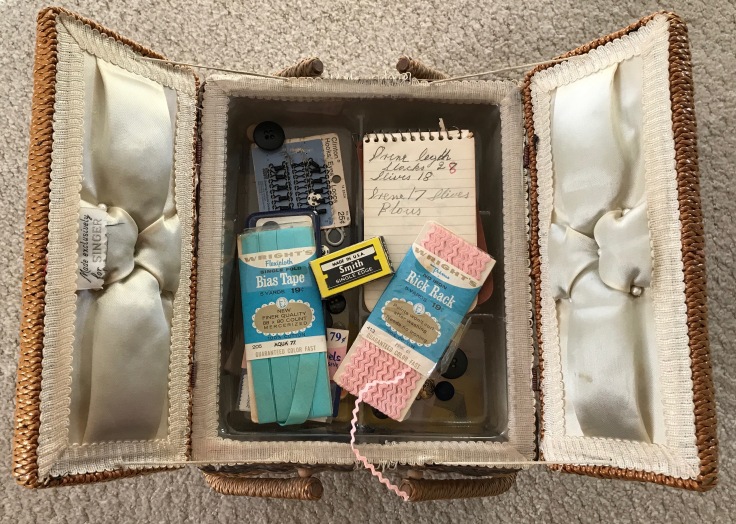 She passed it along to me and I spent an afternoon sorting through buttons from the 1930s, a tiny decades-old notebook with the measurements of women in the family and tiny embroidered labels that say “Specially Fashioned by Grandma.”

A package of single-edged razor blades in the basket brought back memories of sitting by Grandma’s side at her Singer sewing machine as she dramatically ripped apart my early attempts at making a dress or a blouse. Instead of using a conventional seam ripper, she wielded that razor blade as she tore apart the seams and made me start over again.

Modesty, something I was clueless about in middle school, was often a reason for the redo. I remember buying some lime green material with a daisy pattern from Montgomery Ward around 1965. Grandma objected to the way I carelessly had cut out the pattern, which placed two of the yellow daisy centers on the dress directed over my breasts. “They look like they have headlights pointing at them!” she said with disgust. “Do it over!”

Oddly enough, that experience toughened me and prepared me to deal with editors who would tear apart my copy. Anyone who sat in the presence of Grandma and her razor blade as a child could easily endure criticism from anyone behind a typewriter or computer.

Looking back, Grandma steered me toward a certain Holly Hobbie look with my homemade apparel, about as close to a Little House on the Prairie image that you could get in 1960s Detroit and the era of mini skirts and go-go boots. From someone who served beer and whisky to rough men all day and always dressed in a no-nonsense white blouse and navy skirt, I believe it was Grandma’s way of protecting me and providing me with a kind of armor made of gingham or linen.

My homemade Halloween costumes, homecoming and prom dresses, as well as my wedding gown, were all long-sleeved with high necks and hems that skimmed the ground, as a result of Grandma’s influence. My First Communion dress, which she made and let me put a few stitches in the hem, was one of the rare hand-made short-sleeved outfits I can remember.

Grandma taught me what it meant to be meticulous. Plaids must match at the seams and unfinished seams were a cardinal sin. All raw edges had to be finished, even if no one could see them. It was all about having standards.

It also was about making whatever you needed or wanted. When one of my boys became fascinated by the Civil War, Grandma made him a Union Army uniform, complete with epaulets and a sash. She handcrafted everything from bed linens to winter coats and taught me to do the same.

As we sat at her sewing machine, Grandma would chatter on about a variety of subjects, from landscaping to church tithing.

“Never clean your house first,” she told me. “Always do the lawn and the front flower beds before anything else. That’s what people see. But when you do clean the house, make sure you get the corners. I always check to see if people were too lazy to do the corners when I visit. And clean the bathroom first. Nobody will care if your bedroom is clean.”

Regarding tithing, Grandma said, “Always give, but not too much. Too tempting for the priests to buy booze and get into trouble.”

When I told her I was thinking about becoming a nun because I loved the Immaculate Heart of Mary sisters who taught at my Catholic school in Detroit, she offered this advice: “Don’t do it. My sister Natalie is a nun. All they do in the convent is fight. You don’t want to live with a bunch of women.”

Spending hours sewing at her side gave me access to her storytelling ability and tales from the old country.

I learned the reason why Grandma had an aversion to making quilts, despite my interest in American folk art in my 20s and request to do some quilting with her. It was because her mother alerted the police as Grandma left her village to come to Detroit. A family quilt was in her trunk and her mother wanted it back. She claimed Grandma stole it. Grandma turned over the quilt and the police let her go.

This led to more stories about her mother, who today probably would be diagnosed with borderline personality disorder. There were stories about my maternal great-grandmother, a woman who smoked a pipe while she made beautifully crocheted linens, and neighbor women who endured the Russian occupation of their village.

When we weren’t sewing, we were shopping for material. Because money was always tight, we typically bought things from the remnant table at the J.L. Hudson department store in downtown Detroit. “You can make something beautiful out of leftovers,” Grandma always reminded me.

Even though her lessons could be harsh, the sewing room became something of a sacred space for me, a place where an adult shared knowledge about her craft and spent hours talking to me about any subject I cared to discuss, from career plans to whether polyester zippers were better than traditional metal ones.

The greatest lessons were about creativity and making something out of nothing – or at least a little bit of thread, some bias tape and a piece of cloth. 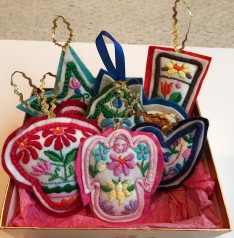 She taught me how to embroider, a lost art and an activity that I have returned to time and again during periods of great stress. I find that pulling out the embroidery hoop, a piece of felt and some colored floss is the best way to take your mind off your troubles and have something beautiful in your hand at the end of it all.

In my first year of marriage, when money was tight and buying Christmas ornaments was out of the question, I drew on Grandma’s sewing lessons and made everything myself for our tiny tree. When I open the little box holding those embroidered ornaments today, I recall those early times and am grateful for how far we’ve come.

Sewing can even be about making peace and reassuring the people around you.

One of my sons fell in love with a Jewish woman and fretted about how his Catholic mother would react. Of course, I loved her. And I showed it by spending a long winter embroidering and then quilting a large chuppah or canopy for them to stand under during their June wedding ceremony. It was filled with tiny purple violets, hearts and doves carrying ribbons stitched on delicate white handkerchief cotton. I envision adding my granddaughter’s initials to the back of it someday when she gets married.

Collaborating on sewing projects continues to be a deep source of satisfaction for me.

Just before my granddaughter Eleanor was born, I worked on a quilt for her with the help of my friend Marilyn, a master quilter in Ann Arbor, Michigan. We selected a pattern of mama elephants and baby elephants in grays and white with touches of brighter colors.

For six months, I worked on the quilt at Marilyn’s house, where her sewing room felt like a church, with its cathedral ceiling, skylights and stacks of quilting material carefully sorted by color and lining the walls like fabric versions of stained glass windows. One wall was covered in felt in a large grid pattern, where we laid out pieces of the quilt and watched its progress. It unfolded like something in an art gallery.

I used Marilyn’s Bernina sewing machine and endured more lessons in humility with a needle and thread. Like Grandma, Marilyn sometimes would rip up my first attempts (this time with a sophisticated razor blade encased in plastic that couldn’t nick her hand) and teach me the right way to craft a complicated pattern made up of tiny pieces.

I felt like I was back in Grandma’s little sewing room in the back of her house on St. Lawrence Street in Detroit, where the simple act of sewing could feel like a sacrament.