When I was a newlywed living in New Baltimore, Michigan my father-in-law Robert Lienert used to drop in several times a week and visit while I made dinner. He would entertain me with stories about growing up on a small farm in Harvard, Nebraska during the days of the Dust Bowl and the Great Depression.

I didn’t realize at the time he was composing the rough draft of his memoirs at my kitchen table. He put them down on paper in December 1979, when he was sidelined with the flu. Our family published them after his death on April 20, 1988 in a book called “A Mile Down to Water.”

“One of the Nebraska jokes of long standing is that, no matter where you are in the state, you are never more than a mile away from water,” he wrote. “Pause. Of course, it’s straight down.”

On Earth Day in the time of the COVID-19 pandemic, it seems like a good time to honor this man, an editor, poet and nature lover who wrote about “farming on a small scale,” “hail, the great destroyer,” and “peony paradise.”

“I would like to set down some of my memories while I may,” he wrote in the foreword. “I hope that perhaps my grandchildren and others can thereby get a taste of what life was like in the days when it was easy to believe that the years stretched sweetly ahead and when hardly anything was hazardous to your health.”

Now that I’m a grandmother, those words inspire me to keep writing. I hope  Eleanor, Felix and Grant will treasure my stories – and those of their great grandfather – and pass them on to their grandkids. 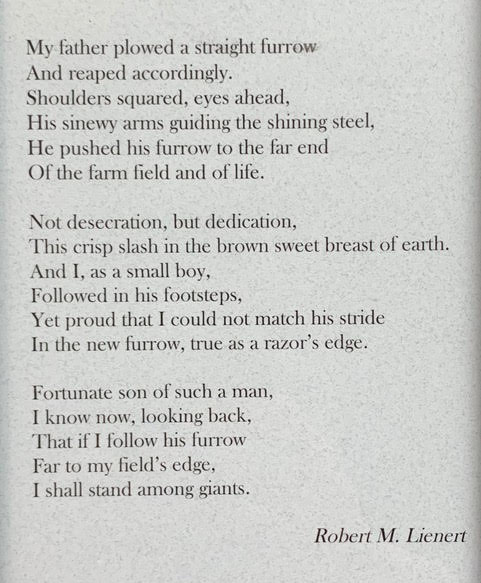