As soon as I spotted the brown tick on the white comforter on my bed, I texted my neighbors Jeannie and Stacey.

“Damn it,” replied Jeannie. “I thought about them the last couple of days and wondered. Was it on you or Rosie?”

The tick likely came from my miniature schnauzer Rosie, who curls up on the comforter and pillows most mornings, looking like my personal version of Andrew Wyeth’s famous watercolor “Master Bedroom,” with its golden retriever snoozing on a perfectly made bed. Rosie on the bed is a heartwarming scene, except during spring tick season in Michigan. 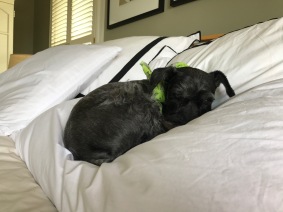 My iPhone pinged again with another incoming text, this time from Stacey.

“Need some more of that rose-geranium stuff, if possible,” I replied.

Stacey is a doctor by day and an exterminator by night.

She came up with a fairly effective home remedy for repelling ticks a couple of years ago, mixing almond oil with rose-geranium oil in her laundry room, bottling it in tiny containers and sharing it on our block. The concoction, when applied to a dog’s collar, paws and belly, seems to keep most of the bugs at bay.

It turns out that fighting ticks, stinkbugs, chipmunks and coyotes has been a great way of bringing neighbors together and building community spirit where I live.

Besides ticks, we’ve also been fighting an infestation of stinkbugs, an invasive species from Asia that releases an odor when disturbed or crushed.

I used to vacuum them up when I saw them in my house, thinking they were too disgusting to touch until another neighbor gave me this warning: “NEVER vacuum a stinkbug!” she said. “They’ll stink up your vacuum and you’ll never get the smell out. What I did was buy a spare vacuum at a garage sale and I use it exclusively for vacuuming stinkbugs!”

Another great household tip from the neighborhood support group!

Chipmunks are a continual problem where I live, too.

I paid an animal-control expert $400 last summer to help me get rid of them because they nearly destroyed a five-foot-tall retaining wall with their series of tunnels. The “expert” set live traps filled with peanuts around my house. He told me that any critters would be humanely relocated to a so-called chipmunk “sanctuary” at a nearby lake “with streams and trees.” He didn’t catch any chipmunks, though, only a couple of baby possums and a naïve homeowner.

A neighbor pointed out to me that the same traps the expert used are on sale at our local hardware story for $20. The bag of nuts probably would have cost me a dollar, she said, and I could have saved myself hundreds of dollars.

And then there are the coyotes, which seem to have no fear of anyone or anything in my subdivision. We all worry about our small dogs and cats, especially after I found a feline skeleton with a blue collar under a tree in my yard. One neighbor sent out a mass email to the entire homeowners’ association, advising us to buy wolf urine (in liquid, granule or pellet form) to sprinkle around our houses to keep coyotes away from our pets.

This became the subject of some debate, with a few arguing that wolf urine doesn’t work in our neighborhood because we don’t have a wolf population and therefore they are not predators to the coyote. “Coyotes will ignore wolf urine or ‘laugh,’” one neighbor observed.

Despite that advice, I stopped at the local general store in our village to inquire about the availability of wolf urine.

“We don’t carry that, but we carry coyote urine,” the woman at the cash register told me.

“Will that deter coyotes?” I asked. “Will they think that there’s another coyote encroaching on their territory?”

“No,” she said. “You use the coyote urine if mice are eating the insulation under the hood of your car. Pour it in a dish over some cotton balls and stick the dish under your car. It works like a miracle.”

I studied the unlabeled brown bottles of coyote urine – a bargain at $4.95 – wondering how someone had gathered the substance. Then I took a picture and left empty-handed.

Back in the neighborhood, the consensus during an informal gathering was that human urine is the only sensible solution to coyote control because we are the animal’s obvious predator.

Since then, I’ve been told that there may be more than one neighbor using it around the hydrangeas and rose bushes, supposedly “after a few beers and a bonfire on a Saturday night.”

One thought on “Stinkbugs, Ticks and Community Spirit”