My 14-year-old niece Julia has been absorbed by the story of St. Genevieve, a Catholic nun who lived in the fourth century and successfully faced down Attila the Hun as he and his hordes threatened Paris.

Julia chose “Genevieve” as her confirmation name, a Catholic tradition that is part of Confirmation, a sacrament that signals a new stage in life and a commitment to follow Jesus. The goal of this religious renaming is to pick a go-to saint, someone you turn to when you need guidance and protection.

In the era of #MeToo, Genevieve is a perfect choice.

As I watched the Confirmation ceremony Monday night at Church of the Divine Child in Dearborn, Michigan, I was surprised and pleased by the number of young girls who picked tough women as their special saints.

Several of the girls chose St. Joan of Arc, the patron of soldiers and an aggressive French military strategist who knew how to wield a sword, besiege towns and direct armies.

She wore armor, had short hair and probably would be described as having gender dysphoria if she lived today. She was burned at the stake in 1431 at the age of 19, after a trial in which she was accused of witchcraft and dressing like a man.  Today, the church considers her to be a saint.

Another popular name this night was St. Maria Goretti, the patron saint of girls, who was the victim of a sexual assault when she was 12.  The Catholic nuns at my school in Detroit in the 1960s taught us to pray for Maria Goretti’s intercession before a dance, party or date to ward off “false love” and to help boys stay on the spiritual path. It is another good choice for a Confirmation name.

The young girls at Divine Child were being confirmed at the same time as two items of breaking news. While I was sitting in the pew, the Apple News feed on my iPhone lit up with the report that the attorney general of New York, one of the top lawyers in the U.S., resigned after being accused of physically abusing four women.

At the same time, the Metropolitan Museum of Art Gala in New York City was grabbing headlines for a costume exhibition called “Heavenly Bodies: Fashion and the Catholic Imagination.” 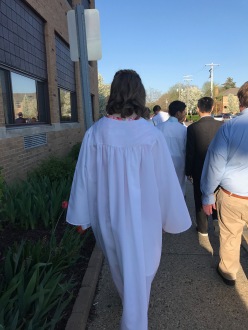 While the young girls in Dearborn wore modest white robes over pastel dresses, celebrities like Rihanna took to the red carpet for the Catholic-themed gala dressed in angel and pope-inspired ensembles, including oversized jeweled crosses and mitres.

The exhibit included a nearly topless fuschia gown patterned after the robes of a cardinal and a leather bondage mask draped in rosary beads, as well as ornate items from the Vatican, including a beehive papal tiara with 18,000 diamonds. I couldn’t help putting these unrelated events next to each other in my mind, a juxtaposition of beauty and blasphemy. 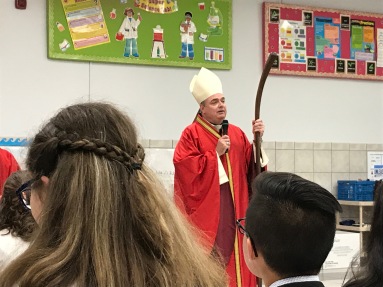 Just before the Dearborn ceremony, Bishop Robert Fisher, a cleric in the Archdiocese of Detroit and the presider at the ceremony, spoke to the “Confirmandi” and their sponsors in the school gym, where he explained the various parts of his medieval-looking outfit, including a wooden staff originally designed to herd sheep.

At one point, he pulled apart his red vestments to show a large pectoral cross, which would have fit in perfectly at the Met exhibit. The bishop told the kids his cross was designed to ward off evil. It was a private exhibition of ceremonial religious items we rarely get to see.

The 90-minute ceremony that followed was inspiring and touching, but I had been secretly praying that the bishop would have the courage to bring up the #MeToo movement in his sermon.  He didn’t. But he addressed other pressing concerns, including peer pressure and the need to respect life, whether the issue was abortion or euthanasia.

Before the closing hymn, he told a little story that hinted at our post-Christian world, where many young people drift away from the church, even after pledging to remain faithful during events like Confirmation. The story involved a Catholic priest who suggested to other religious that the best way to rid a church belfry of pigeons was to “have them baptized and confirmed– and then they’ll go away.”

On that jarring note, we all headed to the school gym for cookies and punch and out into a world still in need of the intercession of St. Genevieve, St. Joan of Arc and St. Maria Goretti.